Vitiligo (vit-ih-LIE-go) is a disease that destroys the cells that produce melanin, causing white patches on the skin and mucous membranes. 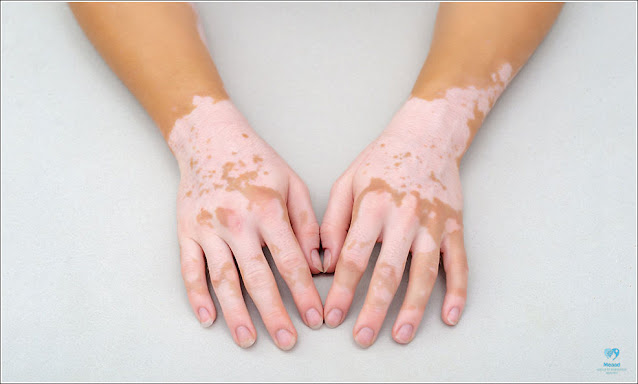 This post talks about the symptoms of Vitiligo and its causes as well as how to diagnose and treat it. It also includes pictures of patients with Vitiligo, so you know what can happen to you if you don't stop it in time.

Vitiligo, also known as leucoderma (loo-ko-DUR-ma) is a common skin disorder that causes the loss of skin color, resulting in white patches. Vitiligo can affect both men and women of any race or age at any time in their lives. The condition occurs when melanocytes, the cells responsible for skin color and pigment production are destroyed by an autoimmune reaction. This means that the body's own immune system attacks and destroys these cells, resulting in patches of white skin.

1- White patches on the skin that increase in size over time.

2- White spots on the mucous membranes, including the tongue and lips.

3- Gray skin color caused by melanocyte destruction and a decrease in melanin production.

4- Itching or pain of skin affected by Vitiligo.

5- Skin thickening in areas of Vitiligo.

6- Hair loss in the areas affected by Vitiligo.

8- Sensitivity to heat exposure that can lead to severe burn injuries in damaged tissue.

9- Being unaware of intense sun exposure or symptoms due to vitiligo.

10- Difficulties in the eyes, such as difficulty seeing in dim light, irritation and intolerance to light.

If you have a large scale skin lightening, and/or a post-inflammatory hyperpigmentation, then you should see your dermatologist for treatment as soon as possible.

What's Causing Your Body To Attack Itself?

Doctors do not know what causes vitiligo; however, they have found evidence that can help guide a diagnosis as well as ways to treat and prevent it. Most often the cause of vitiligo is unknown and comes from a genetic predisposition that leads to an autoimmune reaction affecting the skin cells that produce pigment and coloration.

Vitiligo can take many years to develop but could happen at any age, regardless of race or gender. It can occur in anyone, and the condition is not contagious.

Researchers have found that environmental and hormonal factors have been linked with vitiligo, but they still haven't been able to pinpoint the exact cause.

The skin usually does not show signs of vitiligo until many years have passed. As a result, the immune system's reaction to the disease may take time to develop.

Due to the fact that it is rare for most people with Vitiligo to start showing symptoms until in their 40s or 50s, there is no real way to predict when the disease will affect them.

Vitiligo does not cause any bodily harm, but it will make a person appear different from others. It can also be a major stress on those who are affected by it and uncomfortable to those around them.

One of the most important complications of vitiligo is the risk of sunburn and skin cancer in areas affected by vitiligo. Those with vitiligo should use sunscreen that has a high SPF, wear protective clothing to cover large areas of white skin, always wear UV-protective sunglasses when exposed to sunlight or use anti-UV glasses to avoid sun exposure for patients with severe vitiligo.

There are no blood tests available to diagnose Vitiligo. Blood tests can detect the presence of antibodies, which may suggest the disease, but it is not definite. A skin biopsy may be performed if needed.

It was previously thought that vitiligo happens when the body's immune system attacks and destroys skin cells that produce melanin. However, new research has found that these cells are not completely destroyed in many cases of vitiligo, so doctors believe that autoimmunity is not the cause of vitiligo.

To get a diagnosis and determine the best treatment plan, your doctor will perform a physical exam, take skin samples and examine your family member's records for similar conditions. Your doctor will also discuss possible treatments with you and go over risks and benefits.

Once you have received a diagnosis of Vitiligo, you need to understand that there is no cure for it but there are ways to manage the symptoms. There is also some research being done to combat vitiligo, so there's a chance new treatments will eventually be available.

Vitiligo patients should see their doctor for an accurate diagnosis and to discuss treatments available. There are several treatments that have been found to be effective in managing the symptoms of vitiligo. These include corticosteroid applied directly to the area affected by the disease, repigmentation with a combination of ultraviolet light therapy and topical steroid, surgical removal of patches where vitiligo is most noticeable, medical and surgical hair restoration techniques, dermabrasion and others.

The best treatment plans often depend on the severity of symptoms caused by vitiligo. Your doctor can help you choose the appropriate treatment based on the way your body reacts to each medication or recommended procedure.

Different treatment plans often work better for certain patients than others. The best approach is to try them all and use the one that provides you with the best results until you find something that gives you a complete recovery. Since vitiligo is a chronic condition, there's no known cure for this disease, but your doctor can help you manage the symptoms so you can lead a normal life.

There are some simple measures that can be taken to prevent vitiligo from worsening your condition. Vitiligo is not contagious, but you should avoid scratching or picking at the affected areas. This can lead to infection and dark spots on your skin caused by burst blood vessels.

People with this condition should wear sunglasses with maximum SPF protection when exposed to sunlight, stay indoors when UV rays are most intense, use a sunscreen of SPF 30 or higher every time they go outside and avoid tanning beds. Tanning beds can damage your skin and make it appear darker than it really is.

Some studies have found that patients who eat a healthy diet high in fruits and vegetables are less likely to develop vitiligo compared to those who eat unhealthy foods. Protecting your skin from the sun with sunscreen and wearing sunglasses outdoors when UV rays are strong can also help keep Vitiligo at bay.

Vitiligo is a rare disease that affects about 0.4–1% of people in the world.

Vitiligo does not affect men or women equally, but it does affect people of all ages and ethnicities. People who have vitiligo have no family history of this disease, but they do share similar traits, including environmental factors could be leading to the condition. The World Health Organization recognizes the prevalence rates as one in a million people affected by vitiligo worldwide. This amounts to about forty million people in the world.

Vitiligo is estimated to be eight times more common in females than males. This disease is prevalent in people between 10 and 30 years old and a rare condition that usually occurs between ages 15 and 30 years. People with vitiligo rarely have children affected with the same genetic disorder, but there are cases of children inherited vitiligo from their parents.

Some factors associated with vitiligo include: having a close relative who has had the disorder, light skin color, high family income level, having lots of sun exposure and sunburns as a child and being exposed to certain chemicals or strong drugs during pregnancy.

There is no one known cause for vitiligo, but experts believe the autoimmune theory, where the immune system attacks specific skin cells, is the most plausible explanation for the disease as it affects some aspects of vitiligo. Other researchers say that vitiligo might be caused by genetic factors, while others argue it is due to recent environmental stressors like sun exposure.