Psoriasis is a skin disease that causes patches of skin to become red, dry, itchy and covered with silvery scales. Learn more about psoriasis here about symptoms, diagnosis and treatment. 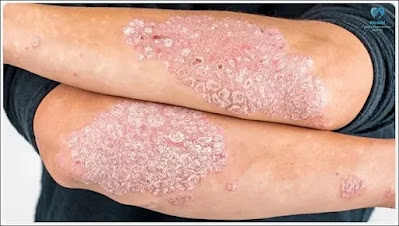 Psoriasis is a chronic condition that causes red patches on the skin which may also be itchy or sore. It appears when the immune system mistakenly attacks healthy cells in the top layer of skin. The severity ranges from mild to severe; the most severe form can significantly impact on daily life for sufferers who are too embarrassed to go out in public due to their appearance.

2. Patches of skin are scaly, flaky and thickened.

3. Patches of skin may crack and bleed easily.

4. Joint pain in hands, feet and elbows is common. (Although this is not a symptom of psoriasis itself the inflammatory process that causes psoriasis can also cause joint pain.)

5. The severity of psoriasis varies from mild to severe forms which affects daily life for sufferers who are too embarrassed to go out in public due to their appearance. Another symptom that differs from person to person is pain or tenderness in the affected areas, itching or burning sensations that can be so severe it wakes you up at night (it gets worse before the morning shower).

types of psoriasis, including:

One form of psoriasis, pustular psoriasis, is a very serious condition and can be life-threatening if not treated promptly. Pustular psoriasis involves painful blisters filled with pus. These blisters can occur anywhere on the body, from the scalp and face to the palms of your hands and soles of your feet. The blisters break quickly and release their pus on the surrounding skin causing itching and irritation. It can be very painful.

If you experience symptoms of psoriasis, such as red, flaky patches on your face or hands, or if your rash is accompanied by itching or burning sensations, see your doctor.

You should also see your doctor if you frequently have sore joints in addition to psoriasis. Your doctor will want to rule out other conditions that can cause joint pain, such as rheumatoid arthritis.

There are many factors that can cause psoriasis. The cause is not well understood, but some primary risk factors known to raise your risk include:

• Certain infections (such as viral infections and tuberculosis) and immune system problems.

People who develop psoriasis are more likely to develop other autoimmune conditions such as lupus erythematosus or rheumatoid arthritis later in life. Genetic predisposition to psoriasis may also play a role.

The risk of developing psoriasis is also affected by your age. Certain factors such as stress, diet and other medical conditions have been studied but the exact factors are not well understood. If you have any of the following, this may raise your risk for developing psoriasis:

• Family history of psoriasis, rheumatoid arthritis or other skin disorders.

• History of viral infections such as hepatitis C and Epstein-Barr virus.

• Family history of tuberculosis or other chronic lung diseases such as bronchiectasis (an airway condition).

• History of heart problems or stroke.

The two most common forms of psoriasis are plaque psoriasis and guttate psoriasis. Other forms include pustular, inverse, arthritic and erythrodermic. Therefore to better understand the cause of your condition, your doctor will need to identify your form of psoriasis, based on its appearance and location on the body, as well as other symptoms that you may be experiencing such as joint pain or loose stools.

Psoriasis is not contagious; however, it may be possible to pass on psoriasis to another person if they come into contact with skin that's affected by psoriasis. It's also possible for an unborn baby to inherit psoriasis from a parent; if you have psoriasis, you will need to inform your doctor if you plan on becoming pregnant or find out that you're already pregnant.

Your doctor will ask questions about your symptoms and medical history. A physical exam will be done to check for signs of psoriasis.

Skin biopsies are used to diagnose psoriasis, especially if there's doubt about the exact form of psoriasis present.

There are three types:

• Dermatologist will take thin tissue samples from affected areas and examine it under a microscope to identify the exact type of psoriasis. The sample is examined under the microscope using a process known as histopathology, where cells are identified according to their appearance and behaviour. At first, a general diagnosis of psoriasis is reached based on the person's medical history and symptoms.

Psoriasis can be effectively treated with various therapies, such as medication, phototherapy or by changing your diet. Treatment selection depends on the severity of your condition as well as your age and level of discomfort or inconvenience experienced.

There are dozens of prescription and over-the-counter medications available that can help treat psoriasis. These medications may also be used along with other therapies to enhance their effectiveness.

The most common type of medication used to treat psoriasis is topical medication. Topical medications are usually applied directly on the skin and absorbed into the body through its skin, which is why they're also known as "topical" medications or "topicals". Within the past few years, new biologic drugs – or medicine containing biological molecules – have been introduced that work by activating the body's immune system in a way similar to how certain other treatments work.

The biologic drugs currently available include:

• INO-201 (tretinoin): A synthetic retinoid that's applied topically to the skin. It works by decreasing skin turnover, which in turn helps treat psoriasis by inhibiting excessive cell growth and cell death. Since it's impossible to know how a drug will affect everyone, some people may experience side effects such as dryness of skin or mouth. It also increases your risk for sunburn, immune system problems and certain cancers such as lymphoma and non-melanoma skin cancers (basal cell carcinoma or squamous cell carcinoma).

• IL-12p40 (pimecrolimus): A topical antibiotic that's applied to the skin. It works by decreasing the production of certain proteins that make up the body's immune system, which helps treat psoriasis by reducing inflammation. Since it is impossible to know how a drug will affect everyone, some people may experience side effects such as dry skin and mouth, infection with tuberculosis or fungal infections and low blood cell counts.

In addition to topical medications, other types of medications used in treating psoriasis include:

• Systemic medications are usually taken orally under the supervision of a doctor. They work differently from topical medicines and are designed to treat psoriasis by reducing inflammation throughout the body. Like other medications, these medications aren't suited for everyone and may come with side effects such as nausea, vomiting, diarrhoea, headaches or flu-like symptoms.

Phototherapy is a medical treatment that uses ultraviolet (UV) light to target and kill abnormal cells in psoriasis. Psoriasis is a chronic disease, so there's no way that it can be cured – once it starts, it will continue to worsen over time. However, most people who use phototherapy can find some relief from their symptoms while they're using the treatment.

Phototherapy works by exposing affected areas of skin to ultraviolet light that kills the abnormal cells and serves as a pain-relieving ice pack for affected areas of the body. The procedure can be done in two ways:

• PUVA therapy is a treatment that uses psoralen (also known as, "PUVA") with ultraviolet light that's administered by a doctor or in a salon. Psoralen works to damage predisposed skin cells and trigger them to die, which provides relief from the symptoms of psoriasis. PUVA usually requires multiple treatments over time (usually weekly or biweekly) to reduce your risk of developing skin cancer or worsening psoriasis. Patients can expect to see improvement after about six months of treatment.

In addition to phototherapy, some people may also find relief from their symptoms with azathioprine or cyclosporine. These medications work differently but offer similar results when used together; they're taken orally under the supervision of a doctor or in a hospital setting. They're usually prescribed for people with severe psoriasis and are given for a limited amount of time (usually three years) before being taken off the market.

Changing your diet can also be beneficial. Some of the best-researched natural therapies for psoriasis include:

• Fish Oil (EPA): Fish oil is a natural source of omega-3 fatty acids, which are known to help alleviate symptoms of psoriasis by decreasing inflammation.

Treatment options for psoriasis may include prescription medications, phototherapy and dietary and lifestyle changes. Some common side effects of these treatments include redness, burning or itching of skin, itching or swelling in the affected area and gastrointestinal distress. While treatments for psoriasis are available including natural supplements, you shouldn't stop taking any prescribed medications without first speaking with your doctor.

In addition to talking with your doctor about specific therapies, you may also find it helpful to join a support group for people with psoriasis. You can find one in your community or online. Both options provide individuals with similar experiences and are a good place to start when dealing with psoriasis.