What Is Popcorn Lung?

Popcorn lung was originally given this name because the disease is common among workers at microwave popcorn factories, where diacetyl is used in the artificial butter flavoring. 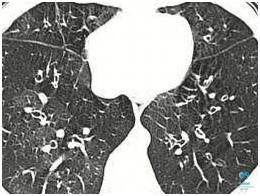 If you have popcorn lung, it doesn't necessarily mean you'll develop symptoms. Symptoms will develop most often in people who have been exposed to high levels of diacetyl fumes for a long period of time, or those who were genetically predisposed to the disease.

Most popcorn lung symptoms are similar to the symptoms of other types of chronic obstructive pulmonary disorder (COPD).

Symptoms of popcorn lung can vary from person to person, but some symptoms include:

3. Wheezing and shortness of breath

4. Cough that is worse at night or with lying down or exercise

Some symptoms may be caused by other diseases, so it's important to know your personal history. What to do if you have popcorn lung? If you think you have popcorn lung, see a doctor right away. An early diagnosis and treatment can reduce the severity of the disease and help prevent further complications such as chronic cough, fever and fainting (syncope). In fact, a small percentage of people who develop popcorn lung never experience symptoms before dying from an unrelated cause.

The chemical that causes popcorn lung is diacetyl, which can be found in some foods and drinks, especially processed artificial butter flavor. Although butter flavoring has been used for years in the food industry (including microwave popcorn), it wasn't until 2002 that a link to popcorn lung was established. At this time, several workers at plants that manufacture and package microwave popcorn were diagnosed with popcorn lung.

How Is Popcorn Lung Diagnosed?

Doctors rule out other causes of breathing problems like nasal and sinus infections as well as lung cancer before making a diagnosis of popcorn lung. A diagnosis can't be made unless the condition is causing symptoms. Once you have popcorn lung, there are three forms for treatment:

1. Treating the symptoms – anti-inflammatory drugs, bronchodilators and steroids may be used to relieve your symptoms.

2. Treating the underlying cause – steroids are used to prevent further damage to your airways and decrease inflammation in your lungs.

3. Preventing further damage – steroids may be used together with oxygen therapy to help prevent further damage of the airways after you stop being exposed to diacetyl fumes or other problems that may worsen your condition.

In the early stages of popcorn lung, anti-inflammatory drugs and bronchodilators may be used to treat the symptoms. If your symptoms are mild or you have only been exposed to diacetyl fumes for a short period of time, these medications may be able to treat your condition. If you have popcorn lung and have been exposed to high levels of diacetyl fumes from continuous exposure, steroids may be used along with bronchodilators and anti-inflammatory medications. In some cases, corticosteroids are given in high doses (doses above 10 mg/day), which can cause side effects such as thinning hair and acne breakouts in men. Doctors will determine the best treatment for you if you have popcorn lung.

Factors that increase your risk of developing popcorn lung include:

2. A genetic predisposition to develop bronchiolitis obliterans, which is an abnormal thickening of the airways in the lungs. This is usually found in smokers older than 30 years old and family members who have a genetic defect that affects their immune system or bowel functions. Those with bronchiolitis obliterans are more likely to develop chronic bronchitis and asthma, as well as other respiratory illnesses, including pneumonia. In some cases, they may even develop popcorn lung.

3. Previous exposure to occupational hazards and inhalation of chemicals or dusts, including organic solvents, in the air.

4. Smoking (though tobacco smoke isn't a cause of popcorn lung)

5. Working at a microwave popcorn factory

The good news is that you may be able to prevent popcorn lung by avoiding exposure to diacetyl fumes. In addition, quitting smoking, reducing your exposure to dust and humid air, and avoiding foods with diacetyl may help prevent or slow the progression of this disease.

2. Make sure your smoke detector is working properly and replace it if you have to.

3. Change the batteries for each device every six months or according to manufacturer's instructions.

4. Have your heating system, fireplaces and water heaters checked annually by a professional to make sure they are working properly and vents are not blocked by dust or debris.

5. Make sure fireplaces have a screen or have installed a safety device.

6. Have your heating system and smoke detectors inspected annually by a professional to make sure they are working properly and vents are not blocked by dust or debris.

7. Regularly clean the dirt and dust from the top of your refrigerator, as well as the back of the unit and behind it.

8. Vacuum at least three times a week (and more often if you have pets). Use a vacuum cleaner equipped with a HEPA filter, which can trap small particles of dust, keeping them out of the air you breathe.

10. If you can no longer avoid inhaling food flavoring chemicals, try to use the smallest amounts of these additives necessary to bring your favorite foods from "ok" to "more than ok."

11. Avoid indoor plants with oils such as cinnamon and citrus because a lot of them have oils with diacetyl.

Popcorn lung symptoms normally appear several years after you have been exposed to high levels of diacetyl fumes from your work environment. Cooking fumes contain diacetyl, and it can also be found in other flavored foods, including candies and chips. Although more research is needed about the causes of popcorn lung, experts agree that doctors should monitor workers who are exposed to high levels of diacetyl fumes. Popcorn lung is not a type of cancer, but it can cause irreversible damage to your lungs if left untreated.

If you have been diagnosed with popcorn lung or any other respiratory condition, contact the Lung Institute at (800)525-7661 for more information about pulmonary treatments that could help you breathe better.