Malaria is a disease caused by parasites that are transmitted through the bite of an infected mosquito. This disease is commonly found in tropical and subtropical climates, and is most predominant in rural areas. Malaria causes flu-like symptoms, including fever, chills, vomiting, headache and muscle pain. 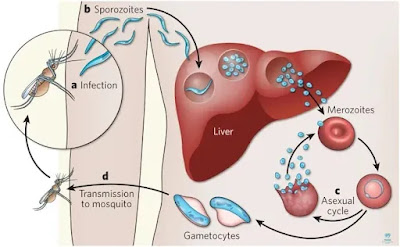 Malaria can be diagnosed by a blood test or through a urine sample analysis to search for the malaria parasite. If you think that you may have Malaria it is important to seek medical attention as soon as possible.

1. Fever: Fever occurs when the body temperature rises above the normal range, and it is one of the most common symptoms associated with malaria. People tend to feel better when the temperature drops below 36.0°C (96.8°F) because their sweat glands will stop working and this causes their body temperature to rise even further. By treating the fever, you are lessening your chances of getting sicker from another symptom such as dehydration or chills or shock.

2. Chills: Chills are caused by blood vessels contracting to preserve body heat, which makes them feel colder than normal in response to a fever that has broken out as a result of malaria infection. The problem with having chills is that they can make it harder to get the body temperature down, which makes your fever worse. You may also experience muscle aches and headaches as a result of chills.

3. Headaches: Headache, or migraine headaches are typically not caused by malaria but symptoms can be similar to them. The most common cause of headache is actually related to the flu and so you should be more concerned about your fever than your headache if you have a fever associated with malaria infection.

4. Dizziness: Dizziness is the result of a deficiency in blood oxygen levels and can be caused by an infection, heavy drinking, dehydration or even high altitude. Sometimes you may not notice that you have dizziness, but if you experience any unusual disorientation or confusion then it's probably cause for concern.

5. Fatigue: You may experience fatigue as a result of your fever from malaria infection or from other associated symptoms such as chills, vomiting and headaches. The best thing to do when you're feeling tired is to rest and drink plenty of water to make sure that your body is getting enough fluid so that it can start functioning normally again.

6. Nausea: Malaria infection can decrease the amount of salt and water that your body is able to absorb from food, and this causes your stomach to become upset. This can cause you to feel nauseous which makes it harder for you to eat or drink fluids because it'll feel as if your stomach is being empty.

If you have any of the following symptoms, and your symptoms continue for more than 48 hours without being treated, it is imperative that you seek medical attention.

• Dizziness after resting for 3 days

Malaria is caused by a parasite that is passed to humans through the bite of an infected mosquito. Malaria can also spread via contaminated food and water. Malaria infects a person by causing microscopic parasites, called protozoa, to invade the red blood cells of the person's body. The protozoa then multiply in these cells and enter the person's bloodstream when they are infected with malaria.

Malaria can be detected through a series of tests. A blood sample is usually drawn from those who are believed to have malaria for testing purposes, which will look for signs that white blood cells have been altered or destroyed from malaria infection.

Malaria is diagnosed through blood tests. A lab will test your blood for the presence of parasites. If malaria is confirmed, then a blood sample may also be taken to test for the presence of the parasite in your liver and spleen. You will also be given medication to prevent another infection from occurring so that you can continue on your way with good health.

There are several different types of malaria that exist and each type requires different treatment methods and medications. The types that can be treated with the use of drugs include:

1. P. falciparum:The most common type and one that is easily seen in the blood, malaria is identified by the thick, white ring around the back of a red blood cell.

2. P. vivax: A smaller parasite than P. falciparum but harder to detect and this type usually appears as a small speck or spot in the center of a red blood cell.

3. P. malariae: Another parasite that is still relatively uncommon and can cause the appearance of a dark ring or oval shaped appearance. It is much smaller than the other types.

The principal treatment for P. falciparum malaria is called chloroquine, which is known as a potent medicine that has long been used to combat malaria infections. This medicine needs to be taken continuously for the entire length of the infection, which typically lasts from one to four weeks. Although another popular drug, Fansidar, is much cheaper and more commonly used, it is not recommended now due to the side effects it can cause. Lariam may also be prescribed to make sure that you don't develop further cases of malaria when you get back home from your trip.

• 70% of the world's population is at risk for malaria.

• Each year, about 500 million people are infected with malaria.

• 90% of all malarial deaths occur in Africa.

• 85% of these infections occur in children under the age of 5 years old or pregnant women.

A drug called chloroquine is the standard treatment for malaria, but it isn't effective against P. vivax or P. malariae. Two other drugs are often used to treat these types of malaria infections: mefloquine and primaquine. But these drugs need to be taken for longer periods of time and are slightly more expensive than chloroquine.

• Mosquito bite prevention: In order to reduce your risk of contracting malaria, you can take a pair of scissors and cut off the small tube at the end of your bed net so that mosquitoes cannot enter your bed while you sleep. This technique is called fumigation and if the area you plan to sleep in is already infested with mosquitoes, then you can also take some insect repellent pills that contain DEET, which will help repel the mosquitoes. The only way to make sure that you don't get malaria when traveling is to avoid areas where mosquitoes are common.

• Malaria prevention tablets: You may consider taking malaria prevention pills before you travel if the area that you are going to visit has a high rate of malaria infection. You should consult your doctor or pharmacist before taking these pills though because they could cause problems for people with certain medical conditions or allergies. If you do decide to take these pills, it is best to start taking them 3-4 weeks before you leave, and continue taking them until 4 weeks after you have returned home.

• Vaccination: Several vaccines are available for malaria prevention, but none of them are 100% effective. However, if you plan on spending a lot of time outdoors in an area that has a high risk of malaria infection, then it is recommended that you get vaccinated against malaria.

There are several different drugs that can be used to eliminate the parasite from your body and prevent another infection from occurring. Some of the popular ones include:

1. Chloroquine: This drug is taken for the entire length of the infection. It needs to be taken regularly for about 4 weeks to cure the infection.

2. Fansidar: This is another drug that you should take every day for 7 days. It is very effective in treating P. falciparum malaria and can be used along with chloroquine if needed. Unfortunately, this drug does carry numerous side effects such as dizziness, headaches and rash rashes.

3. Sulfadoxine-pyrimethamine (SP): This is a combination of two drugs that are given to people with P. falciparum malaria to treat them. This drug isn't very effective, and side effects include vomiting, anemia and kidney damage.

4. Routine vaccinations: Malaria can be prevented by getting vaccinated against the malaria parasite at least 6-8 weeks before your trip starts so that you can receive antibodies in advance of your trip so that you don't get infected with malaria when you go back home. The most common vaccines are the ones that are called RTS,S and Mosquira.

5. Plasmapheresis: This is a procedure that removes the malaria parasites by using your own blood plasma and filtering out all of the parasites. Your blood will be filtered in a machine known as a apheresis machine, and then this type of treatment will be carried out to remove the parasites from your body quickly.

6. Quinalozamide: Injecting this drug into the parasites is an effective way to remove them from your body, but you need to take it for about 28 days to make sure that they are completely removed from your system.

7. Artesunate: This should be taken for at least 8-10 days after you have been infected with malaria parasites.

8. Fansidar: This is another drug that can be used in combination with chloroquine as a treatment method, but it doesn't seem to work as well as fansidar alone. It is more expensive than chloroquine and therefore more commonly used.

9. Folic acid: Pregnant women who are at risk of malaria infection should take 4,000 mg of folic acid and then those who are not pregnant can take 5 mg of folic acid every day for the rest of their lives, which will help reduce the risk of infection for them in the future.

10. Primaquine: This is another medication that is used to eliminate the malarial parasites from your body by making them vomit, so they are forced out of your system and are unable to infect your blood. It is best to take this drug only after you have been infected with malaria, because it will not prevent you from getting infected in the first place.