Edema is swelling caused by fluid accumulation in the spaces between cells, which can occur in any tissue or organ. It's a type of oedema that is not caused by injury or infection, but it can sometimes be brought on by those things. 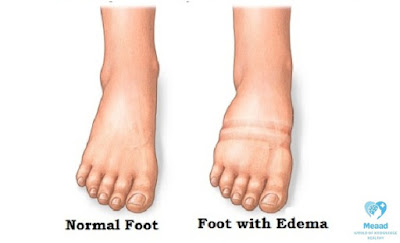 With this post, we hope to provide some insight into what edema is and what the various types are. We also explore the causes of edema and how you might be able to treat it successfully to minimize its effects on your life.

The most common symptom of edema is swelling. It occurs because swelling of the lymph nodes restricts the lymphatic vessels, slowing down the flow of fluid around your body. If a large area is affected, it can lead to significant swelling which can be uncomfortable and sometimes painful. It's a good idea to consult your physician if you experience persistent swelling that doesn't go down within a few days.

In some cases, there will be no noticeable symptoms other than weight gain, which occurs when fluid collects in the abdomen or legs. There are many possible causes for this, including pre-existing medical conditions or simple lifestyle factors such as salt intake or amount of exercise taken.

If there's pressure on the affected area, it can cause pain and tenderness. This is a sign that the swelling is getting worse and needs to be checked out by a physician.

4. Urgency To Go To The Bathroom

A common consequence of edema is an urgent need to go to the bathroom often. It's probably best for you not to ignore this urge as you may be losing valuable fluids which could lead to dehydration if left untreated. As such, if you experience an urgent need to take a restroom break, get out of bed immediately and take care of business while sitting down.

5. Pain In The Extremities

Having pain when you walk is also a common symptom of edema. It's usually worse if you exercise as your body will demand more blood which can further limit the lymphatic system, causing more swelling. Your pain may be intermittent and come in waves, and some of the worst cases may even require crutches for support. 6. Swollen Lymph Nodes

A swollen lymph node is another clear sign that edema is present in your body. Usually, this happens because fluid has built up around the nodes and they've become stiffer as a result. Consult your doctor if you have this symptom as it could be a sign of an underlying medical condition.

If you experience any of the above symptoms, it's recommended that you see your doctor as soon as possible. If left untreated, edema can lead to numerous health issues.

One of the most common causes of edema is dehydration. When you don't get enough water, your body will retain whatever liquid it can. In most cases, this means that your body will take in excess fluids and hold them around your organs and muscle tissue. This makes it harder for blood to flow through which can cause significant swelling.

If you already have a medical condition, you're more likely to have edema as one of its symptoms. Some examples include heart failure or cirrhosis of the liver where fluid retention is caused by liver disease. Underactive thyroid is another example in which the thyroid does not function properly, causing fluid retention and edema.

If you're on a high-salt diet, you may be more likely to get edema. In most cases, this is brought about by water retention which can be caused by different factors such as medication or liver problems.

The change in hormone levels that happens with pregnancy is the biggest cause of edema during pregnancy, which is why women are advised to drink enough water to prevent fluid retention. For whatever reason, the body retains too much fluid during pregnancy and this causes swelling in the tissue as well as other parts of the body where water has been retained.

Sometimes, edema is brought on by a lack of exercise or physical activity. When your muscle mass decreases and your blood circulation reaches dangerous levels, you can develop edema in the affected muscle mass. This is because blood does not circulate properly around your entire body and collects in one area which results in swelling.

Edema can sometimes be passed down genetically from one generation to another as it's a sign that your lymphatic system isn't functioning properly.

If you're a smoker who also eats more salt than what's healthy in your diet, it can disrupt the balance in your body and lead to edema. People who smoke are more likely to have edema as one of its symptoms. Edema can also caused by kidney problems, liver problems, or heart failure.

Many women experience edema because of hormonal imbalances during menstruation or pregnancy. If both conditions occur at the same time and go untreated for extended periods of time without balancing out, your body may retain excess fluid which gets stored around your organs and muscles creating an imbalance. This imbalance can cause you to store excess fluid in the tissue joints and your fingertips.

9. Use of medication or pharmaceutical drugs

If you take certain medications, you could develop edema as a side effect. According to studies, common side effects of medications may include edema of the face and hands as well as swelling of the ankles and feet.

4. Weight loss due to water depletion

8. Breathlessness: Inability to take in enough air into the lungs or exhale carbon dioxide can result in breathlessness which makes it hard for you to perform simple tasks during the day without getting tired quickly. There may be vomiting of blood and retching with painful, dry coughs which result in a lot of sputum, lung congestion and difficulty breathing even at rest (Kumar 2005).

The elimination of edema can be done in a variety of ways. The common ways include:

2. A blood test for kidney function and electrolytes to rule out kidney disease or dehydration

3. X-rays to take pictures of the affected areas of your body

4. Ultrasound scan if you have a swelling in the feet, ankles or hands or swelling in your abdomen that may be causing discomfort.

5. CT Scan: A CT scan involves taking pictures of your body from top to bottom so that it can show you if there is fluid present in any parts of your body and specifically in which area of the body this fluid is located (Niv-Meir 1999).

6. MRI of your Chest: You may undergo this procedure if you have swelling in your chest, as it will check for lung cancer as well.

7. Blood test to determine if there is any cancer present in the body.

8. Recommendations from your doctor: Blood tests will determine if you have an electrolyte imbalance or not which can cause edema because of lack of proper digestion and a loss of minerals such as sodium, potassium and calcium (Caldwell 2002).

9. Respiration test: If you experience breathlessness during exercise or even after moving around, there are tests that can be performed such as a spirometry test to check for the presence of fluid in the lungs (Young 2000).

Treatment of edema depends on the cause. If it's caused by something that can be fixed, your doctor will recommend a change in diet, medication or a combination of the two. Various treatment options include:

Some of the treatments include the following:

1. Dietary adjustments: certain foods can cause water retention while others help to prevent this from happening. Onions are among those that can expand your veins and make you retain water but if consumed in large amounts, it's likely to increase blood pressure and lead to high blood pressure (Cheung 2003).

2. Decreasing sodium intake: Foods that contain sodium in large quantities may lead to fluid retention such as canned products and frozen meals (White 2003).

4. Drinking plenty of water to flush out the excess sodium and fluids from your body (Lindberg 2003).

5. Standing up slowly after sitting down or lying down, especially when you've experienced edema in the legs and feet or swelling in your hands and fingers. If you get up too quickly, you're likely to lose your balance which may lead to injuries such as falls.

If these treatment methods fail to put an end to edema for a long period of time, your doctor will recommend medical procedures such as acupuncture, massage therapy or compression stockings on a regular basis to increase the flow of blood where it's needed (Somerville 1999). In rare cases, surgery is required to remove the excessive swelling in your body (Kumar 2005).

1. Keep your body hydrated at all times

2. A healthy diet is essential to get rid of edema

3. Avoid taking medications that have serious side effects

4. Get plenty of rest

5. Wear compression stockings on a regular basis if recommended by your doctor to improve blood flow to the affected areas in your body (Dinarello 2000).

Edema can be treated naturally and effectively with an elimination diet which will allow you to live a normal life without edema symptoms and pain. Once you learn how common foods such as gluten, dairy and soy products can contribute to swelling in your body (common symptoms of edema include pains in the joints, swelling in the feet and ankles), you'll start eliminating them from your diet naturally. Doing this will allow you to increase your healthy intake of food which will lead to the normal functioning of your kidneys and other organs which control the amount of water you retain in your body. You'll be able to stop the swelling and relieve pain by reducing the amount of water you take in.