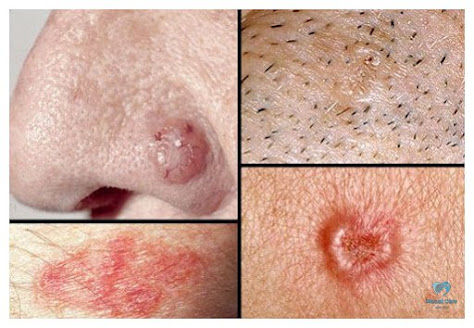 Basal cell carcinoma is a type of skin cancer that is usually not life threatening and does not spread to other parts of the body.

If you have basal cell carcinoma, your doctor can remove it by cutting it out. You will likely need stitches or staples and may need a bandage or dressing on the wound. Be sure to let your doctor know if there is any discharge from the skin where the lesion was removed, because this could indicate an infection of some kind. If left untreated, basal cell carcinoma can progress in severity and invade deeper layers of skin if left unchecked.

There are several methods available to treat basal cell carcinoma:

Topical therapy may include:

Basal cell carcinoma presents in various ways as it invades deeper skin layers. The first signs are often a red, itchy bump making an indentation in the skin. The body shows an immune response by the increased redness and itching. Minimal swelling may be seen unless there is infection present. Other signs of infection include purulent discharge from the wound and pain when pressure is applied to it (swelling).

After the infection has cleared, the redness and swelling may come down, revealing a white or pearly nodule. This nodule is actually a scar-like lesion made of fibrous tissue and collagen. The lesion has invaded deep layers of skin and is beyond the reach of topical medications (and in some cases shaving, waxing, etc.). It must be removed surgically to heal.

An interesting observation is that patients who smoke (and are more likely to develop BCC) also have a higher incidence of mutations in other genes. It has been postulated that smoking increases damage to DNA by also inducing oxidative stress, which causes mutations. However, it is important to note that the carcinogenicity of smoking is due primarily to effects on hematopoietic cells (erythrocytes). Damage caused by tobacco smoke does not affect normal skin or lungs.

The increased risk of developing BCC in people who have had significant past sun exposure suggests that sun damage is involved in the development of BCC, but this is still a point of contention. An additional area of disagreement is whether or not all BCCs arise from sun damage to DNA. The most accepted theory states that UVB radiation attacks the pyrimidine bases thymine and cytosine in DNA and, upon light exposure, leads to the formation of thymine-thymine dimers. These dimers cause mutations that result in the development cancerous tumors (i.e., melanoma). The formation of thymine-thymine dimers is a secondary event to sun exposure.

In the United States, the incidence of basal cell carcinoma is approximately 6,000 to 14,000 new cases per year. The incidence in males and females are about equal. The lifetime risk for someone with an average risk of developing BCC is about 1-2% (1-2% over a lifetimes). In those predisposed to BCC, this risk increases to between 10-15%. It has been suggested that there may be up to one million new cases of basal cell carcinoma in the United States each year, with an annual death rate of roughly 30,000 individuals. The death rate is lower than melanoma, but the mortality rate (from any cause) is higher.

The most recent estimates of the incidence of basal cell carcinoma in the United States suggest that:

The adult age-standardized incidence rates (per 100,000 persons) were as follows:

A 2008 study has shown that young people with a history of sun exposure are 2.4 more likely to develop Basal cell carcinoma.

Anyone who has received a significant amount of sun exposure over the course of many years is at risk for BCC. Individuals who may be at an increased risk include:

Basal cell carcinoma can be prevented by use of sunscreen, avoiding tanning beds, wearing hats, and using sunglasses. BCC is common in older people, so it is recommended that they see a dermatologist yearly for skin checks. At home it is important not to touch your face because viruses on your fingers can cause skin problems on the face.

A 2005 study found that individuals with lighter skin colour are at a higher risk of developing basal cell carcinoma.

The treatment of choice for basal cell carcinoma is surgery, especially if the cancer is large, has invaded nearby tissue, or is located in an area that cannot be easily covered by radiation. Radiation therapy is used to shrink basal cell carcinomas before they are removed. This may be used when the cancer is small and localized or when the patient's immune system is weakened by a disease such as HIV/AIDS. In certain cases, topical cimetidine (Tagamet) can be used either as a primary treatment or adjuvant to other local treatments such as radiation therapy as demonstrated by studies in animal models of BCC.

The initial management of a lesion suspected of being a basal cell carcinoma is excisional biopsy. If the pathology confirms the diagnosis of BCC, then further therapy will depend on the characteristics of the lesion.

Basal cell carcinoma has been associated with human papillomavirus infection.

Patients with basal cell carcinoma are at increased risk of developing additional basal cell cancers, squamous cell skin cancer, or melanoma in areas treated for previous BCCs. In order to try to prevent this, once the cancer is removed (and depending on whether it is a small cancer or not), patients are usually advised to undergo regular check-ups, including physical examinations and skin checks by a physician.

In addition, many patients opt to have a Mohs procedure done in which they undergo surgery while the surgeon removes all of the tumor by “stopping when [they] hit hard tissue.” After surgery, the wound is closed with stitches or surgical staples and then the skin surrounding the wound is frozen with liquid nitrogen. The freezing causes the damaged tissue to fall away from healthy tissue leaving only healthy skin in its place. As this occurs, layers of frozen tissue are peeled away. 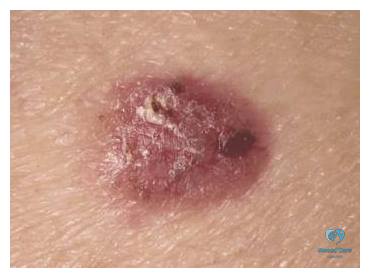 Basal cell carcinoma is the most common skin cancer, accounting for 75-80% of all malignant skin cancers. It occurs commonly in people with a history of significant sun exposure.

There are approximately 3.5 million cases of basal cell carcinoma per year in the United States, making it the most common tumor in humans. About 1% of those are malignant or metastatic and cause death.

"This article uses public domain text from the CDC as cited"

The basal cell carcinoma prognosis depends on the size and location of the tumor and its depth, the stage of the cancer on examination, and the type of treatment used.

Basal cell carcinoma has been linked to use of hair dyes that are a mix of chemicals with high molecular weight compounds (e.g., permanent hair color).

In males with occupational exposure to hair dye chemicals such as paraphenylenediamine (PPD) have been shown to have a higher incidence of basal cell carcinomas than those not exposed.

The PPD is metabolized to 5-aminolaevulinic acid (5-ALA) in the mitochondria of cells exposed to light (implicating sun exposure and potentially sunlight sensitivity); 5-ALA may undergo auto-oxidation/auto polymerisation and then bind covalently with various cell proteins. These may be causative in carcinogenesis by DNA damage via UV induced oxidative damage from ambient ionising radiation.

Exposure to X-rays has been linked to basal cell carcinoma:

1. British families who received x-ray treatments for tuberculosis before World War II had a 10 times higher rate of basal cell carcinoma than those not exposed;

3. Patients with basal cell carcinoma display a high incidence of chromosome breakage, suggesting the disease has a genetic component.

The following are organizations focused on helping those with BCC and their families:

See also the list of suppliers of special equipment for the disabled and elderly.