All a bout cardiomyopathy

All a bout cardiomyopathy

Cardiomyopathy (kahr-dee-o-my-OP-uh-thee) is a disease that affects the heart muscle. It is potentially fatal, and its causes are unknown. Cardiomyopathy can be a primary condition or a symptom of other conditions such as coronary artery disease and diabetes mellitus. There are many different types of cardiomyopathy, which range from mild to life-threatening. It occurs in two main types: dilated and hypertrophic cardiomyopathies. Dilated cardiomyopathy is the most common form of the disease, accounting for up to 80% of all cases. Symptoms include shortness of breath, dizziness, chest pains and fainting. It may be caused by a structural problem with the heart valve. Hypertrophic cardiomyopathy is a disease that leads to enlargement of the heart muscle and can cause weakening of the heart's pumping function (arrhythmias). 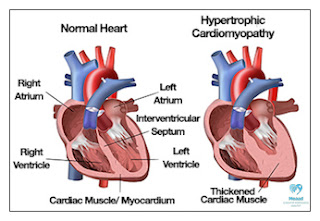 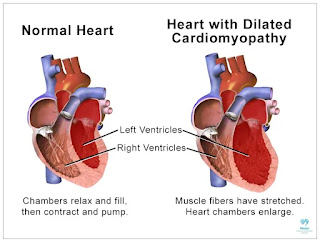 Shortness of breath, fatigue, or chest pain may develop suddenly and can worsen quickly. Unexplained fainting (syncope), too fast or too slow heart rate (tachycardia or bradycardia), and lightheadedness are also signs of cardiomyopathy.

Symptoms depend on the type of cardiomyopathy:

Dilated cardiomyopathy usually causes severe shortness of breath that becomes worse with activity and when lying flat. Chest pain, heart rhythm problems (arrhythmias), and peripheral edema (fluid retention) may occur as well. The skin in your chest may be pink or pale, and you may have difficulty breathing if fluid builds up in the lungs. At first, you may have trouble sleeping. As the disease progresses, you may develop a new type of heart failure called congestive heart failure (CHF) that makes your heart work harder to pump blood and oxygen to the body.

Hypertrophic cardiomyopathy is similar to dilated cardiomyopathy, but it can lead to serious weakening of the pumping ability of your heart muscle (heart failure). Symptoms include shortness of breath, fatigue, dizziness or fainting when standing up after lying down for a long time. Your symptoms may get worse if you exercise (which increases your blood pressure), or if you stand up from sitting or lying down too quickly. You may have heart rhythm problems, such as an abnormal heart beat called an arrhythmia, heart murmur, or abnormal electrocardiogram (ECG or EKG). You may also have a swollen liver or kidney disease.

If you feel symptoms such as shortness of breath, general weakness, and dizziness, you may want to seek medical attention. If you have been diagnosed with a heart condition or had a heart attack in the past, it is essential that you see a cardiologist on an annual basis. The National Heart, Lung and Blood Institute states that "screening tests can also help detect possible early symptoms of heart failure years before the onset of clinical signs and symptoms."

Diabetes mellitus is a condition that occurs when the body does not produce enough insulin. Insulin is a hormone that helps to control the amount of sugar (glucose) in your blood. People with diabetes typically have high blood glucose levels, which may cause damage to the heart muscle.

The heart has two main pumping chambers, the left and right ventricles. A buildup of fatty substances called plaque can narrow or block the arteries leading to the heart, which can lead to severe chest pain and difficulty breathing.

A heart attack happens when a blood clot (thrombus) blocks a major artery in your heart (the coronary artery). Bleeding in the heart muscle and sudden death can also occur. Heart attacks can be life-threatening.

Taking drugs for high blood pressure, high cholesterol or diabetes can lead to heart disease. Taking certain medicines (e.g., calcium channel blockers, digitalis glycosides) may increase your risk of developing cardiomyopathy. In addition, some medicines used to treat schizophrenia and bipolar disorder have been associated with the development of cardiomyopathy.

This syndrome is caused by exposure of the fetus to alcohol. It is believed that the damage to the fetus affects one or more vital organs, such as brain development and function, heart function and kidney damage.

Although no studies have been able to prove this, viral infections such as Coxsackie virus have been linked with cardiomyopathy.

Cardiomyopathy has been reported in children with Down syndrome, a type of genetic disorder that occurs when an individual has three copies of chromosome 21 instead of the normal two copies.

Your health care provider will ask you about your symptoms, medical history, and family history of premature heart failure (CHF). A physical exam will be done. Your doctor or nurse may ask you to perform a complete physical examination, including a thorough examination of your heart sounds and how effectively your heart is pumping with each beat. Specialized tests to check and evaluate your heart, such as:

Echocardiogram (a test using sound waves to produce an image of the heart's structure and function):

This is the most commonly used cardiac imaging technique. An echocardiogram will help your doctor or nurse determine whether you have cardiomyopathy. Your doctor or nurse will place a probe, called a transducer, over your chest wall. The sound waves transmitted by the probe travel through the body until they reach and reflect off structures, such as abnormal areas in the heart or fluids in the lungs, that cause echoes. A computer converts these echoes into a video display of the structures around and within your heart that are being examined. The echocardiogram will help your doctor or nurse measure the size of your heart's chambers, valves and vessels and determine whether you have blood clots, fluid or abnormal heart rhythms.

During an ECG, electrodes are placed on the chest wall to record electric signals produced by the heart at rest and during every heartbeat.

Diagnosis: The diagnosis of cardiomyopathy can be difficult due to its broad range of symptoms, variable progression and a variety of potential causes. In order to fully diagnose cardiomyopathy, a comprehensive approach is necessary to determine its exact cause or causes as well as any underlying secondary conditions that may be related or contributing factors.

It is important to determine the underlying cause/s as this will allow for best treatment options.

Treatment is directed at the most appropriate symptom. For example, if you have a fever and your doctor suspects that you have cardiomyopathy, he or she will send you for imaging tests and blood tests to check your heart function. Some treatments are aimed at reducing symptoms and others are aimed at improving heart function once it has been diagnosed. Treatment may include the following:

The outlook is good in the majority of cases. Most people who are diagnosed early are treated appropriately and live a normal life, without severe symptoms. If a person has advanced heart failure, he or she may be referred to a heart transplant center. An estimated 2.6 million Americans suffer from chronic hypertension (essential hypertension) and an estimated 200,000 to 500,000 Americans have left ventricular hypertrophy - both conditions that can lead to cardiomyopathy. Hypertension and chronic alcohol use are the leading causes of cardiomyopathy.

The number of people living with any type of heart failure is 6–8 million, and this number is expected to grow as the population ages. The Centers for Disease Control (CDC) states that more than half of heart failure deaths could have been prevented and indicates that primary prevention should be a key strategy in addressing cardiovascular disparities. This means that steps should be taken to help patients lead healthy lives with healthy habits and lifestyles. Many conditions, such as hypertension (high blood pressure), high cholesterol levels, diabetes, or smoking can lead to a diagnosis of cardiomyopathy or worsen its severity. Many of these lifestyle issues have been identified as potential risk factors for developing cardiomyopathy. People with metabolic conditions such as diabetes are more likely to develop cardiomyopathy than those without. Smoking is a common cause of cardiovascular disease. Excessive alcohol consumption can also lead to cardiomyopathy and an increased risk of heart attack, stroke or cardiovascular death. There are few limits to what people can do which can improve their cardiovascular health, including weight control, physical activity, or medications such  as statins or ACE inhibitors that lower cholesterol levels and blood pressure.

Drug discovery has been "relatively unsuccessful" over the last decades in terms of discovering drugs with new mechanisms or leading to significant improvements in survival. However, identifying disease-causing genes and using this information to develop new drugs has been successful with diseases such as cystic fibrosis and diabetes. Drug discovery is an ongoing process that is constantly modifying the goals of new drug development which aims to lead to a significant improvement in the current treatment. This includes a more specific targeting of pathways involved in heart failure rather than the overshoot that occurs often with new drugs. The field of cardiac genetics continues to be an excellent source for identifying novel pathways involved in heart failure and thus targets for developing new therapies.

Prevention processes can include lifestyle changes, health screenings, or even surgical interventions before symptoms begin to appear. While further treatment may be necessary, it can often help people "live well" with their heart condition.